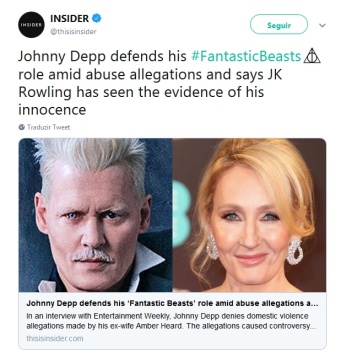 It’s been two years since Johnny Depp surprised audiences by appearing near the end of Fantastic Beasts and Where to Find Them. The actor’s casting was the Harry Potter prequel’s best-kept secret, a climatic surprise when Newt Scamander (Eddie Redmayne) magically revealed that the fugitive dark wizard Gellert Grindelwald had been hiding in plain sight the whole movie, disguised as Percival Graves (Colin Farrell).

Yet the casting of the three-time Oscar nominee drew mixed reactions from fans. A few months before the film’s premiere, Depp was accused of physical and emotional abuse by his ex-wife, actress Amber Heard. Depp denied the allegations. After production was announced on the film’s sequel, Fantastic Beasts: The Crimes of Grindelwald — with Depp’s character right in the title — studio Warner Bros., screenwriter J.K. Rowling, and director David Yates were compelled to issue statements supporting Depp’s participation. “Based on our understanding of the circumstances, the filmmakers and I are not only comfortable sticking with our original casting, but genuinely happy to have Johnny playing a major character in the movies,” Rowling wrote.

Depp has never given an interview about the role until now. For this week’s cover story on The Crimes of Grindelwald, EW spoke to the film’s cast, several of whom spoke highly of the actor’s work. “I was very curious how this guy was gonna be on set,” one costar said. “It was right in the middle of, you know … I only observed him just being totally sweet and professional.” Depp also helped design Grindelwald’s unique look (a pasty-faced, platinum-haired vision of fascistic extremism), and added his own improvisational touches while filming. “An example being when Johnny conducts a barrage of spells in one of the film’s climactic scenes like a conductor guiding an orchestra, except instead of creating music he’s effectively creating fiery mayhem and death,” Yates recalls.

Of course, how Depp acted on set, and how he performs on screen, will be, for some, totally beside the point. This is a highly unusual situation for a blockbuster Hollywood title. Here’s a big-budget, family-friendly fantasy franchise (with three more films planned) delivering a timely message of humanity and inclusiveness by a progressive author of the most beloved book series of our time. Its best-known actor, playing the title character, apparently gives a scene-stealing performance. Yet he’s also undeniably a lightning rod for controversy.

Below, Depp spoke by phone with EW to discuss creating his character. We asked the actor about joining the franchise, developing Grindelwald’s look, his character’s sexuality, and for his response to Harry Potter fans who protest his participation in the film.
Warner Bros. Pictures

ENTERTAINMENT WEEKLY: Let’s go back to the beginning, before the first film. Were you a Harry Potter fan at all before all this?
JOHNNY DEPP: I read the books when my kids were smaller and watched the films with them. The books were superb. What J.K. [Rowling] delivered is really a difficult thing to do as a writer — to create a whole new universe and a set of rules. And you pick it up in one fell swoop in the first book and first film. It’s a whole lot of information and I was amazed — you never felt like you were being slathered with exposition or being condescended to. It’s good literature and great writing in its own right. It ticks all the boxes. And I had a lot friends in the film, like Robbie Coltrane (Hagrid) is a great friend. Richard Griffiths (Vernon Dursley) was a great friend, rest his soul. So I was pretty familiar with them and hugely impressed.

Did you meet with Rowling initially?
We met by Skype. We had a very long conversation. We got together again when I arrived in London for fittings. From the first second it’s been an absolute treat and the most positive and fun experience. The opportunity to play one of her characters and try to bring something to the part that might even hopefully surprise her or Yates, that was a great challenge but a real gas. A lot of fun.

What initially drew you to playing Gellert Grindelwald?
I found the character fascinating and complex. My instinct reaction is he was like a human version of Finnegans Wake: James Joyce’s novel begins and ends in the middle of a sentence. You come in in mid-thought and then it’s a very confusing ride.

In the first film, Colin Farrell played Grindelwald, disguised as Percival Graves. Did his performance influence things at all?
It does, and then it doesn’t. As Grindelwald [was pretending to be] Graves, his respon­sibility is to portray Graves. I suppose the more contemplative moments of Colin’s — the more silent moments — for me, that’s when I would see bits of Grindelwald.

You’re known for having a hand in creating your characters. We only got to see him briefly in the first film, did you have any say in his initial appearance?
I had an image in my head of the guy. The beauty of J.K. and of Yates is they put trust in me to a degree. J.K. and I had some really nice talks and I had some ideas and she just said, “I can’t wait to see what you do with him.” It was beautifully left as this open gift.

Did the character’s conception evolve at all between the two films?
You get one brief introduction to Grindelwald in the first one. There were a number of things in the second film we got to plug in and utilize that gives you more of an insight into Grindelwald and that’s all due to J.K.’s approach to the character. Sometimes things arrive and for me in the moment and its always important to pay attention to whatever that is, when you have a certain instinct about something. I always follow it. She and David were great in terms of allowing me to step outside of the screenplay and dialogue as written and travel a bit more and try things. Something happening by chance. To me, that’s always the most satisfying — mistakes or accidents.

He now has, as one of your costars referred to, a “Scary Eye,” one eye rather different from the other. Does that have a backstory, is that just creepy?
It’s a character choice. I saw Grindelwald as more than one, if you know what I mean. I almost felt like he’s maybe two people. He’s twins in one body. So a gamey eye is more like the other side of him. Sort of like a brain for each eye, an albino twin, and he’s somewhere in the middle.

Based on some things your castmates have said, some fans will make Donald Trump comparisons. Is that fair?
I don’t see Donald Trump comparisons at all. To me, there’s something almost childlike in [Grindelwald]. His dream is for the wizard world to stand tall and above. It’s a fascistic element, and there’s nothing more dangerous than somebody who is a dreamer with a specific vision that’s very strong and very dangerous and he can make it happen. But no character wakes up and goes, “I’m going to do the worst things possible today and be evil as hell.” I do believe Grindelwald is an oddly likable character.

What does Grindelwald think of Dum­bledore at this point?
I think he’s just waiting. He’s looking forward to [their inevitable showdown]. I think there’s probably a lot of residue left over from days gone by. They quite bonded, you know? When you loved someone, and cared for someone, and it arrives into a [combative] arena — as it has with Dumbledore and Grindelwald — it’s very dangerous when it becomes personal.

There’s been lots of focus on Dumbledore’s sexuality and how much should be in the film, but very little speculating about Grindlewald. What’s your take on your character’s sexuality and how much of that is apparent in the portrayal?
I think it should be left up to the audience to feel it first, and when the time comes … It makes the situation with Dum­bledore all the more intense. I think there’s a jealousy with Scamander. He sees Scamander as Dumbledore’s protégé — his boy, in a way. That in itself is enough for Grindelwald to want to take Scamander down in a way that is ferocious and eternal.

Another controversy surrounded your participation in the film. The director, studio, and Rowling issued statements of support. What was that like for you, and is there anything you’d say to fans on the fence about seeing the film?
I’ll be honest with you, I felt bad for J.K. having to field all these various feelings from people out there. I felt bad that she had to take that. But ultimately, there is real controversy. The fact remains I was falsely accused, which is why I’m suing the Sun newspaper for defamation for repeating false accusations. J.K. has seen the evidence and therefore knows I was falsely accused, and that’s why she has publicly supported me. She doesn’t take things lightly. She would not stand up if she didn’t know the truth. So that’s really it.

[Note: Depp’s attorney has claimed “evidence” will be presented during court proceedings in The Sun defamation case next month. Heard’s team has slammed the actor’s denials as “shamefully continuing his psychological abuse of Ms. Heard, who has attempted to put a very painful part of her life firmly in her past.”]

Anything else you want fans to know?
A couple of things. I feel like the main thing as an actor is your loyalty. It’s my job to enforce the author’s vision and also be true to the director’s vision. And then there’s being true to my vision. It’s a major responsibility, being handed the keys to this car. My intense loyalty is to not just J.K. and David Yates but to the people who go and see the films as well, the people who have invested their lives into this magnificent, incredible world J.K. has created. I went full tilt and headfirst into the character knowing the responsibility that I had. It’s good to take the audience on a ride they’re not necessarily expecting, yet with great respect to the world they’ve come to understand and know. The Potter fans are like scholars of this stuff which I find incredibly impressive. They know that world inside and out. I hope to give them something they haven’t seen before. 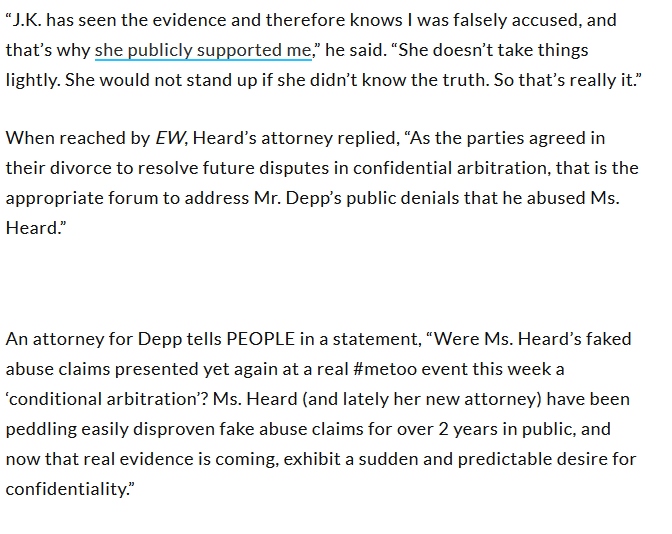